TDD stands for Test-Driven Development. It means that you write tests before the code. At first sight that doesn’t sound very practical and a waste of time, but if you dig deeper, you will find that there is much more to this approach than meets the eye.

There are a lot of benefits I will list for you below:

The laws of TDD

Robert C. Martin(“Uncle Bob”), you might know him from the book Clean Code, defined three laws for TDD. Those laws can make or break the TDD process.

3 You are not allowed to write any more production code than necessary to pass the one failing unit test. Meaning writing your code as efficiently as possible, working incrementally, and checking after every line of code you write if you passed the test.

The names of the steps in this workflow are inspired by the status the tests can have: Red: Means failing tests, also often marked red in your terminal Refactor: This is the step in the process where you write your code. Depending on how far you are in the process, it will be coding or refactoring. The first goal should always be to make the test pass. The second goal is to optimize your code while keeping the tests green. Green: Means the test has passed. Always check if there is room for improvement.

As you can see in the image below, this is a constant cycle until everything is 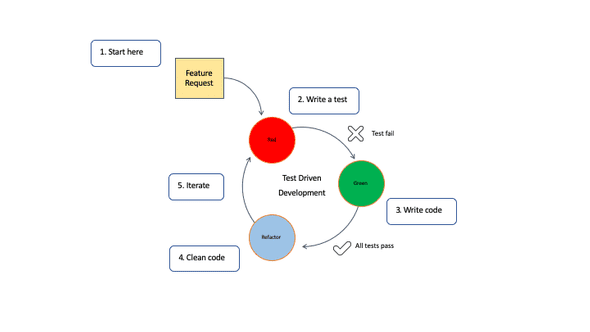 In this article, we will also create a movie component, the TDD way. Demonstrating to you this is also possible with visual components. Let’s start with the setup and workflow first. We discussed the workflow in the last part. So let’s put that into practice. If we look at that process, the only three things we need are: The tests The code The test results

Even though this is a visual component, we are not interested in the browser. This takes some getting used to. But think about it, wherein the steps above is the browser required? It will only take you out of the flow. The setup below is the one I recommend within your IDE. I’m using VSCode, but this view can be achieved in any IDE with a terminal integrated. 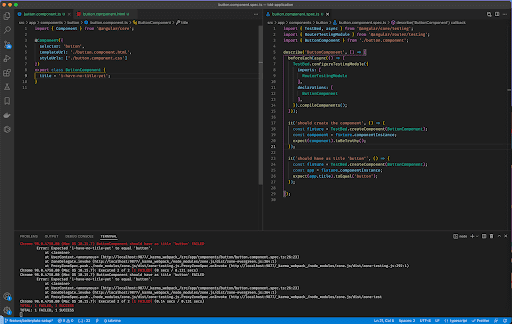 We have an Angular app here using karma and jasmine that come with the generated app. On the left, you see the component and the HTML. On the right, you see the test. On the bottom, you see the failing test. The test suite runs with the –watch flag, meaning it’s watching the changes in my files. As soon as it changes, it will re-run all the tests.

How this would work in practice:

The hardest thing about TDD to get used to is not the work itself but the idea that you have to work the other way around. It feels like you are starting from the end of the process and are working back to the beginning. You have to think differently about writing your code, and that’s where the magic happens. Because you are writing tests first, you start thinking in structures. Think of it as a blueprint for the code you are about to write.

Remember those times when you are working on a user story and find out along the way that half of the requirements are missing? That belongs to the past. Let me tell you why: You write tests in small pieces. When all our tests are green, the feature is done. When something is missing, you will notice it when you write the test, so the implementation can’t happen with missing requirements. You are forced to be nitpicky about your requirements. A great way to go about this is to make sure the requirements you got are in the tests, and you add the missing requirements you found while writing the tests to the user story and discuss it with your product owner. When both of you agree, you can start with the implementation.

Most common pitfalls of TDD

What do TDD and TypeScript have in common?

At first glance, TDD and TypeScript may have nothing to do with each other, but when you look at the process side of things, you will realize they have some fundamental things in common.

In this article we covered the advantages of test driven development over regular coding principles and discovered the paradigm and mindset switch required to fully understand this way of thinking. Also we discoverd the most common pitfalls developers make when starting with TDD. As a bonus we compared TypeScript to TDD and discussed the similarities between the two. Are you ready to start with test driven development?