Creating a time management app in Angular and Typescript Part 1

It is time I combine what I say in my blog with my craft: Development. I’m building a web-app, that will help you with time management. In this part, I go through to basic setup and the creation of the first small components. Let’s start!

In this article, I give you six steps to manage your time: Tips for developing effective time management skills

I want to make it easy for everyone to use effective time management. So I want to reduce as many manual steps as I can and make it accessible for everyone. I will take you to the whole process I go through while creating this app.

What are we going to build

First of all, let me give you a picture of what we will be building. I created two screens. Which do not yet include user login and app navigation. The final app will look way different. This is just a mock-up so I can take you along in my thought process. 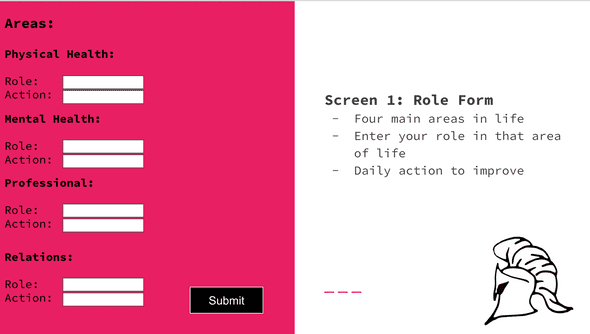 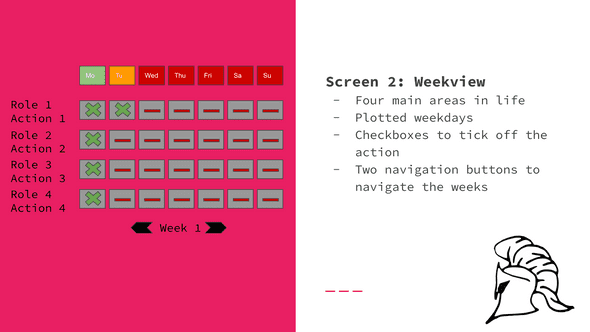 Creation and setup of the app

I am a big fan of Typescript and currently, I think the front-end framework currently works best with that is Angular. They go hand in hand seamlessly and it is almost like they are married.

The two screens consist of different components, let’s try to dissect them.

Let me start with a small quote from the article:

The first step is to find out what roles are important to you. Think about this and dig deep. These are the fundamentals your planning will be built on.

You see I start there with roles. So I’m also going to take that as a starting point for this app. I like to start with the smallest component possible concerning roles.

That would be the area detail where the role resides. Open a new terminal and enter the following command to scaffold an Angular component:

To make this component visible on the app add it to:

If you open your browser you should see some template text in there. Something like: Area Detail Works!

Let’s think about the properties we want to have in the area details. If you look at the screens you’ll know it’s the following:

The ideal moment for us to create the Interface.

WAIT But before we continue

I want you to think about the file structure of your app. I did not use the scaffolded structure but moved some folders around and created some new ones.

This requires some extra work but lets you scale much easier later on in the process.

In that file we can add the following Typescript code:

Let’s apply the Typescript Interface to the Angular Component by opening:

Add the following to the HTML template:

You will see the defined area in the browser. So we know it works. So now you can remove it again from:

When you look at the second screen you see a list of areas on the left side of the table. This will be possible to add yourself using a form. But for now, we will use a predefined list.

Think about it, when the user filled out the form, how will the second screen use that data? Exactly! As a list.

Browse to your components folder and let’s generate the Angular Area List component:

What you see here is that we can re-use our IAreaDetail Typescript Interface. That’s because our list will consist exactly out of a list with area details.

As mentioned before, we are not creating the input form yet, also there is no API yet. So we are going to mock our data.

But even if we mock the data Angular wants us to get that data using an Angular Service. So browse to your services folder and let’s create one:

To make use of this Angular Service we need a list of mock areas, so in the same folder create a new file called:

Paste the following data into that file:

We export an array of objects, that imports and applies the area list Typescript Interface we created earlier. Note that we are again using the IAreaDetail interface without importing it.

Now we have everything we need to finalize the Angular Service, so open:

Open and do the following:

In the end your Typescript file should something like this:

There is one step left to tie this all together and that is to display the list. Let’s open:

And paste the following code in there:

We create a list and loop over the areas, for every area we want to use the area detail Angular Component. So we give it one area object as a prop.

However our area detail Angular Component. is not yet ready to receive props, so let’s make it ready to do that.

Paste the following code into the Typescript file:

You see we put @Input in front of the area data attribute, don’t forget to import it from angular/core.

This means that this Angular Component can now receive props. Because in the HTML we used the area data attribute based on the same Typescript Interface, no changes are required there.

Open your browser, still no list of areas yet! Why?

When we tested our Angular Component earlier on in the browser we added it to:

This file is found in the root folder. It is the main file that gets loaded. If your Angular Component is not in there directly or indirectly it will not show. You don’t have to add every Angular Component in here, just the most high level. So make sure you add the area list Angular Component. It should look like this:

Save the file refresh your browser and voila! Your list with areas is now visible. You will see something like this: 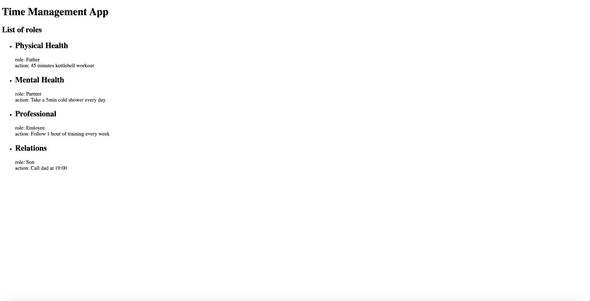 In the screenshot, you might already recognize the left column from screen two in the designs. Next up is adding the weekdays to it.

Navigate into your components folder and generate a new Angular Component called week-roster:

Navigate to the week-roster HTML file and paste in the content of this: Github Gist

When you completed those actions, your HTML file should look something like this:

What did we do here? We made sure that instead of the static table we had before, the rows are dynamically generated based on the available areas.

We want to tick off the actions, for that we need checkboxes. So lets add them to the HTML. Within the loop created for the td tags add a checkbox like this:

When we look at our browser there is still nothing visible. How can this be? You might know what is going on. We still need to add our week-roster Angular Component to the app component HTML file.

If everything went okay you should see something like this on your screen: 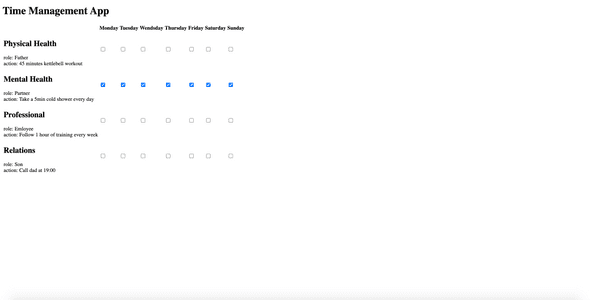 The other Typescript feature we used is the Typescript Auto Import. When you have your IDE correctly setup, in this case, I use Visual Studio Code in combination with the Auto Import extension. Just start typing the class name of the Angular Service or Component you would like to use. Your IDE will suggest the correct item in the autocompletion and will automatically import the matched item using Typescript Auto Import

You can find the code we discussed in this repo: Angular Time management App Github Repository

In Creating a time management app in Angular and Typescript Part 2, we start using Typescript to bring our app to live.